THE SAGA OF THE CITROËN FAMILY : a European story


THE SAGA OF THE CITROËN FAMILY, a European story …

The Citroën family is no ordinary family.  Not only because they bear a very well-known name, made famous worldwide by André Citroën, but because they show particularly notable features originating from diverse roots.

The family derives from immigrants, connected to several European countries. André Citroën’s father left Holland and emigrated to France during the 19th century. His mother was Polish. Georgina Bingen, André Citroën’s wife, was Italian. My father Bernard was French. My mother Piroska was Hungarian and became Swedish during the 2nd World War: she spoke 7 languages fluently. I was born in Spain as was my brother Philippe. My other brother Bernard was born in France: he is married to Jeffrey Krogh who is Danish and became British a few years ago. My cousin the Marquis André de Saint-Sauveur (son of Jacqueline Citroën) was married to the late Ivana Andjelic-Walch who was Yugoslavian.  The family is truly European.

It is also a family that have emigrated. My parents lived in Spain and in Mexico for many years. During the 2nd World War, my mother lived in Italy before taking refuge in Sweden. For many years, I lived and worked in Venezuela (where my 3 children were born). My brother Philippe lives in Belgium.  My other brother Bernard lives in Luxembourg with a 2nd home in the UK. My eldest daughter Clémentine has spent some years living in Colombia (her 2 children were born there). My younger daughter Anne-Rosalie lives in Great Britain. My son Charles-Henri decided to stay in Paris.

On my father’s side, it is a Jewish family, but some members became Catholic. During the 1960’s, my father was baptized. My mother was a practicing catholic. My parents raised my brothers and I as Catholics.

The Citroën family includes quite a number of fighters who fought for France and, in several cases, died for France : my great-uncle Bernard, André Citroën’s brother, was killed in 1914 trying to rescue a companion in the trenches of World War 1 - As an officer, André Citroën himself fought in the trenches before taking the initiative of proposing the immediate construction of a shell factory to the French government in 1915 – Louis-Hugues Citroën, André Citroën‘s nephew, died in a German concentration camp in 1944 – Jacques Bingen, André Citroën’s brother-in-law and a French Resistance hero, was posthumously made “Compagnon de la Libération” : Général de Gaulle, with whom he worked closely, ordered him to become the Head ad interim of the Resistance for the South of France after Jean Moulin, the Head of the French Resistance was tortured and killed. Betrayed, Jacques Bingen was arrested by the Gestapo and, knowing too many secrets, preferred to commit suicide (historian Jean Lacouture considers him as one of the 3 or 4 most exceptional leaders of the Resistance) – His brother Max Bingen died for France in 1917 – My father Bernard Citroën secretly left France to join General de Gaulle in England where he became a bomber pilot in the “Groupe Lorraine” : he carried out a great number of bombing missions in Normandy and Brittany in 1944 ; at the beginning of the War, being a Jew, he was dismissed from the French Army by the Vichy regime. For a long time, he was president of the FAFL (Forces Aériennes Françaises Libres) – My uncle Maxime Citroën fought in Africa, as an officer during the 2nd World War.

Since 1987, every 3 years, I have been appointed by the French government as « Conseiller du Commerce Extérieur de la France” (French Foreign Trade Advisor), a voluntary role in which I promote the international business development of French companies. I am also an “Ambassador” of the “Amicale Citroën Internationale” which brings together about 70.000 Citroën collectors and enthusiasts gathered in more than 1000 clubs worldwide.

The family has been a victim of the dark forces (or not so dark) of capitalism : in 1934, amidst the global economic crisis of the early 30’s, André Citroën, whose company “Automobiles Citroën” was facing severe cash flow problems, did not receive any help from his partners, the banks or the State. He lost control of the company and, shortly after, he tragically died. A few months later, “Automobiles Citroën”, under the management of the new main shareholder, Michelin, found the path of success again. My father wrote the story of this dramatic end in his book “La Conjuration de Javel”.

Out of respect to such outstanding ancestors, their efforts, sacrifices, successes, and their roles which so benefited our country; belonging to such a lineage gives one responsibilities and a real obligation to do one’s best to try to be useful, and to always rise to the occasion … 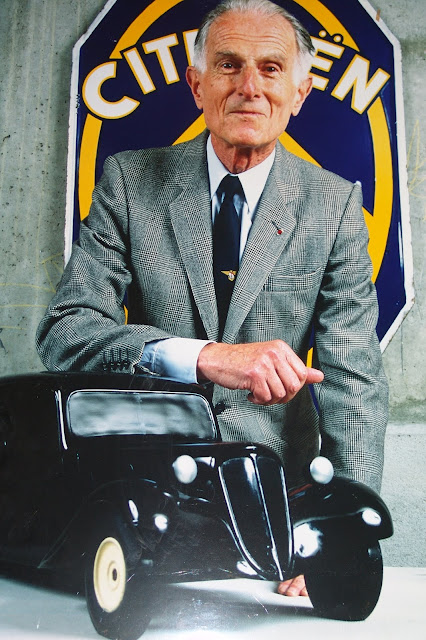